I absolutely love my Bunduawn 360 awning from BundutecUSA.

I added mine to my trailer in the fall of 2017 and have used it all over North America, from Maine to the Mexican border. As of this writing–late Oct 2019–that means somewhere around 600 nights so far.

Though not officially named a 360, everyone calls it the Bundutec or Bunduawn 360, meaning it wraps both ends and one full side. Bundutec also makes a 270, and make both the 360 and the 270 in three backplate lengths. They will do custom sizes, as well. With a reach of almost eight feet out in each direction, mine provides an amazing amount of coverage.

Both solid and shade walls are available. I have some of each. The solid walls can be seen in the images below, combined in some images with FPG’s Thermashields, with which I’ve been experimenting. The shade walls (none shown) are a screen fabric and can be used both for insects and for a see through shade. Was pretty effective as shade wall when used in the Chihuahuan Desert last winter.

I’ve used my awning and walls all over America and have a blast setting up and experimenting with different configurations. Sometimes I add walls just towards the prevailing wind as in the image below, sometimes more enclosed. I’ve learned you don’t always have to have a completely enclosed room to be comfortable in a windy or cold weather situation. You don’t always need a full enclosure for privacy, either.

I use the set up above a lot. Using my awning and sidewalls as much as I have, I’ve learned I don’t always have to enclose the whole area under the awning to make it more comfortable. I can set up two side walls as shown above, in the direction of the prevailing breeze, and make my galley and work area far more comfortable. Also handy on a hot, sunny day to set up like this.

I’ve experimented with hanging the walls straight down, zipped together, but prefer them flared most of the time. I like the extra square feet at ground level–handy for firewood or a table, as shown above–and like the small opening between the two walls, too.

For colder weather, when I want to contain heat much more than just a breezy night, I close it in more:

The footprint under cover on the far side in the image above is almost eight feet out by almost twenty-four feet long. I have my complete outdoor kitchen, sitting area, and workspace under cover.

Bundutec also has triangle awning extensions that attach via wide heavy-duty hook & loops to the awning edge to square off the awning end. That doubles the coverage at each end. There is a triangle corner extension added to the awning at each end on this side in the image above and below.

The walls to left and right are Bundutec. The center wall is FPG Thermashield.

Because the awning reaches almost eight feet in each direction (with the 96″ backboard size), I have almost twenty-four feet under cover. When I add the triangle corner extensions, I have almost 16′ x 24′ under cover. Sometimes I back right up so the end is just over a firepit, so I can have a fire even if it’s raining like hell.

Open configuration with triangle corner extensions added to this end, squaring off and doubling the footprint under cover. Compare to the first image at the top.

Support poles only needed when adding the triangle extensions, which have no support or struts of their own.

The awning is super easy and quick to deploy, super quick and easy to stow, and has an aluminized resin coating to reflect heat. See the “Just awning, no walls” image, 2nd pic above.

Compared to other awnings, and I looked at ’em all, I found the Bunduawn 360 to be the best value ($1500 USD at the time of this post) for what I want in an awning. Versatile, multi-configurational, and super easy to use.

I have a BunduEl 270 for the van, too, configured to wrap the passenger side and rear. I am holding off installing it, though, ’til I decide what I’m doing for a pop-top. These are South African products and are available from bundutecusa.com.

Primary products shown in above images:

Your order helps us donate more masks to communities in need.

“Ordering again, because your masks are the very best.” Jason M. Lincoln NE

“I wear my masks for 8.5 hours at work. They are comfortable all day and don’t get damp or itchy. I appreciate the adjustable ear loops, too!“ ~ Emily, Miss Portland Diner

FAQ
Where are face masks required?
Where do you donate masks?
How can I help more directly?
How do I care for my masks?
What materials are used?
How do face masks work?
Where can I order face masks?
This design! Are you an engineer?

To help more directly with our mask donation efforts: 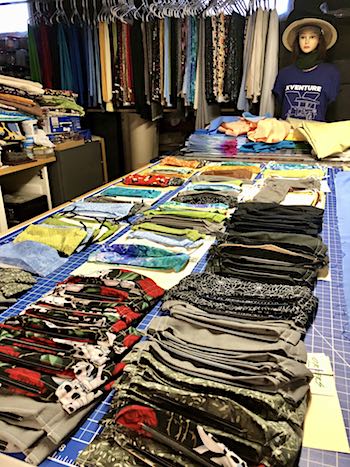 We accept disposable gloves, disposable masks, and hand sanitizer to send with face mask donations. Please contact me for details.

You can also Make a Donation. All contributions go directly towards materials and shipping costs for masks as well purchasing the items mentioned above to include in mask donation packages.
~ Thank you!

“We love them and wear them everyday – the masks are comfortable, breathable and easily adjustable. We’ll be ordering more soon.” ~ Carolyn