Here’s what I’ve learned about setting up solar power. I don’t pretend to be an expert with all the answers, but am happy to share what I’ve learned over the years of using solar as my primary power source while full-timing it on the road and camping around North America.

NOTE: This same set-up can be used for an off-grid cabin, outbuilding on a farm, or camper/trailer in one’s backyard; basically anywhere you want to save energy from the sun to power and run lights, pumps, and tools, etc.

SHORT VERSION:
Hooking up a small solar system to power your needs is really straightforward. Whether you have folding or mounted panels, they should go through a charge controller and then to a battery or bank of batteries. From there all power to your led lighting, water pump, inverter, air compressor, or whatever you want to hook up will be done just like wiring things without a solar system: power from battery to a fuse block, then out to the various circuits.

LONG VERSION:
Most folding panels and some mounted panels, like from Renogy, Zamp or elsewhere will come with an inexpensive charge controller built-in on the back that shows battery status very simply, if at all; usually with LED lights.

If you prefer a charge controller with a digital LCD display and a bit more info, you can easily bypass the built-in controller (or get panels without one) and install your own more sophisticated controller showing voltage, charging current, charging capacity, battery types, when your battery is full, and fault codes.

I prefer the digital readouts so I know more exactly what I’m pulling in for amps, what my batteries are storing, and how charged they are. Better charge controllers also have a 5 step system to charge and manage your batteries. All this may sound confusing, but using a controller with a digital readout will help you better understand it all.

For smaller solar systems like folding panels and most vehicle rooftop setups, you really only need a PWM (Pulse Width Modulation) charge controller. For larger systems, an MPPT (Maximum Power Point Tracking) charge controller can tweak more output from the panels. MPPT charge controllers will typically provide more details, so some folks prefer them for small systems, too.

Here’s a great explanation on the Victron site (look down to point 3): Which Charge Controller: PWM or MPPT?

To show a typical digital readout on a PWM, here’s a short vid of the charge controller I use, taken on a windy day with clouds moving fast across the sun, displaying charging current in amps:

What happens when there’s steady wind at 16-17mph on the ground and faster winds up high, pushing clouds fast past the sun. Being fed by my 120W @overlandsolar panel, input to the controller settled at 6.7A for a good while, then went all sporadic on and off for a few hours. . . . @zampsolar #chargecontroller #solarpower #sunpower #feedingbatteries #green #storingenergy #offgrid #offgridliving #overlandgear #gearreview #travelwriter #travelblogger #cloudyday #thesunisout #sunshine #nomad #lifeontheroad #ontheroad #camping #camplife #selfsustainable #sustainable #zampsolar

It rarely bounces around so much. It typically reacts much slower to shade or how directly it is pointed at the sun as the earth turns. That can be a big thing, by the way, maximizing the angle of your panels, both horizontally and vertically.

We bypassed the simple built-in controller on my panels in favor of the better one on my trailer. My panels came with a 10 gauge 15′ fused cord with a standard SAE plug on the other end hooked up to wiring going to the controller. The controller was bypassed right on the back of the panel with Andersen plugs so the panels now feed directly into the 15′ cord. This also makes it possible for me to add an extension between my panel and the fused 15′ cord when I want.

I made a 30′ extension from 10 gauge wire with an Andersen plug on each end, so now have a 45′ radius from the trailer hook up to my panels. This makes it much easier to move my panels around camp to take advantage of openings in the canopy overhead or to aim them more directly at the sun to optimize solar gain.

The other end of the cord from the Andersen plug has a standard SAE plug. Here’s a shortened version of that (SAE on left, Andersen on right, for those unfamiliar) though you should add a fused link where necessary:

The SAE connection plugs into the wires to the charge controller, which in many systems is mounted close to your battery or mounted in a spot where you can monitor things more closely. It’s easier if that is in the nose box with your batteries or right inside your vehicle or trailer in an easily seen spot. If you have to keep going all the way out to your panel, then getting down on the ground or contorting around to see the back so you can see your controller readouts, you won’t be checking it as often and therefore won’t be maximizing solar gain. 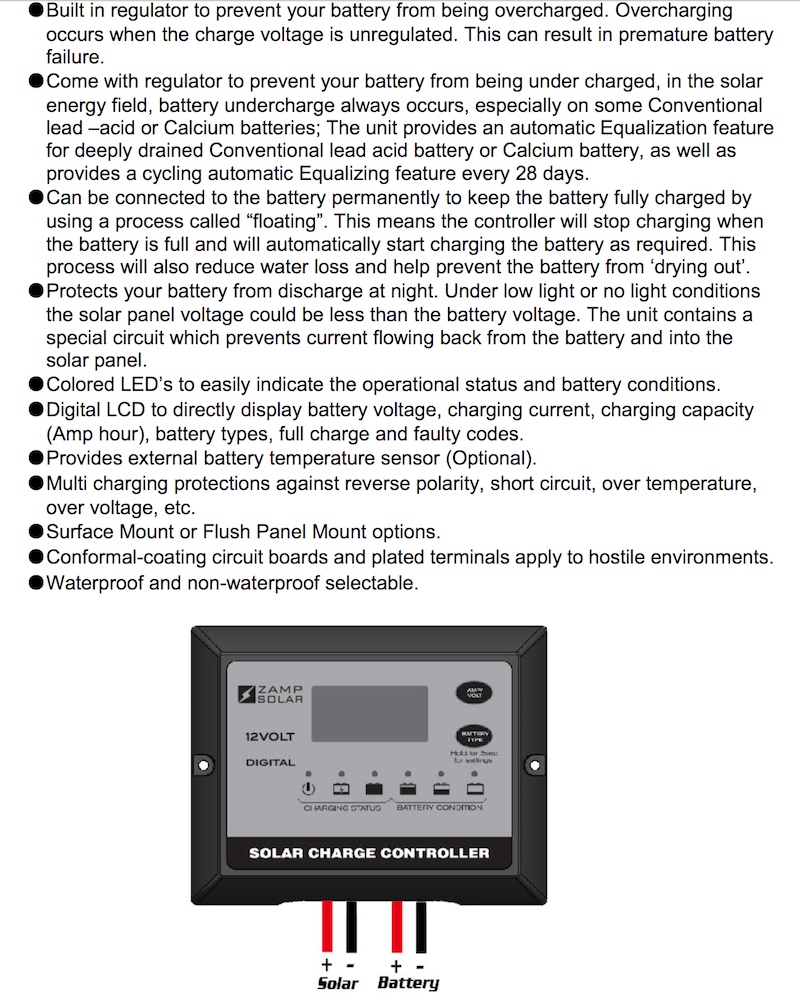 For those who would like to read more, here’s the whole manual in .pdf.

Now you have your solar panel(s) hooked up to the battery through a charge controller. Solar is usually hooked up to your house (auxiliary) battery bank, not your cranking battery. Though my panels did come with a simple alligator clip set up that I can hook directly to my cranking battery in case I have a dead or low battery.

From there it’s just normal wiring like you would if you didn’t have a solar system, with a fuse box like Blue Sea ($20-50 or so, depending on number of circuits) or SPod – which can get crazy expensive depending on which one you want, how many circuits, and if you want to have a touch screen inside your vehicle to control the circuits.

I’ve seen guys use Siri on their phones, through the SPod bluetooth and an app, to control things like power to their air compressor by voice. Something much more simple like the Blue Sea fuse block above is the way to go for most of us. The one I have shown in the image below is the Blue Sea 6 Circuit with cover.

From left to right and clockwise in the images shown above and below: