You are here: Home / Archives for nowhere road

I need to dig into my files to see when I made this image. Fifteen or more years ago now, I’m sure. It was after a huge blizzard turned ice storm in the peculiar part of Oklahoma where the panhandle touches four other states.

I was running blind with two lady truckers as we wound our way down through darkness in Colorado, trying to get through on any road still open in the storm.

Chatter on the CB told us the interstate ahead was fouled with jack-knifed trailers and four-wheelers sliding into each other with cars scattered like matchsticks.

I found a way around and led our little convoy over to La Junta and Lamar and then south towards Oklahoma. We were the only ones out as the blizzard howled on.

‘Driving by Braille!” one called out on the radio. That’s when you can’t see the road or where the lanes are, so depend on rumble strips to let you know you’re at the edge.

We hit the two lane, roaring through intersections in the dark, our headlights the only competition to the one or two streetlights in small towns covered in snow. I asked one of the lady drivers to get her truck out front and run lead. The snow was getting too deep for my van to plow through so I brought up the rear.

She couldn’t see on one windy turn and tapped her brakes, red brake lights magnified by falling flakes. The gal behind her, in front of me, slammed on hers to the sudden light, her trailer sliding half sideways and back. I hit mine too, counter steering my fishtail just like I knew what I was doing, sliding within inches of kissing the ass of that trailer.

We made it down to the big Love’s truck stop the far edge of Boise City sometime after midnight and all huddled into a booth to warm up, amazed we’d made it through and happy to lay eyes on each other after only meeting on the radio.

I made this image the next morning as I headed out on US 412 east of Boise City, sun shining and road glistening.

Longer than a memory, this image takes me right back there every time I see it.

I make high-quality, premium handmade masks. All masks are made to order. Order now to hold your place in line.

Already ordered? I make and ship masks every, single,  day. Shippers tell me “We’re doing our best!” in regards to delayed shipments. Occasional updates at @roaddude 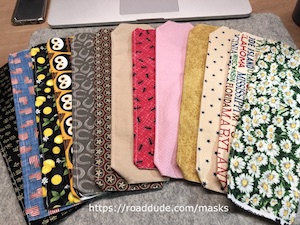 “We really love them.  The quality is amazing and they are comfortable.  Will be great for hiking and work.” ~ Beckie G, SW Harbor

“Both my husband and I love the masks. Fit very well and stay in place when talking.”
~ Susan W, Livermore Falls

“The masks arrived today!  Thanks so much. They are terrific!  Best fit, most comfortable, most stylish of any I have worn or seen.”  ~ Elaine J, SW Harbor

“Of the 3 kinds I have yours are absolutely the most comfortable and best designed! Big bravo 👏🏻 “
~ Ashley L, Texas