You are here: Home / Archives for roadrunner

Been working on ways to incorporate a Roadrunner into a Roaddude logo. 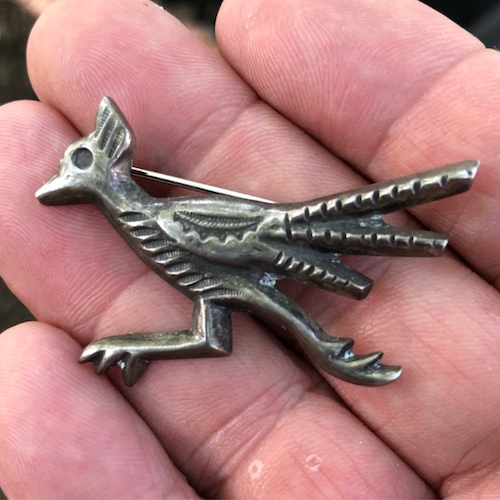 This stylized Roadrunner is one I’ve been wearing for ages, usually on a black leather jacket I’ve also had for ages. Gets a lot of comments.

I found it on an Indian res in New Mexico, maybe southern Arizona, I don’t remember now. It was a flea market out in the middle of a gorgeous wide open landscape with beautiful blue skies and giant cumulus clouds moving slowly across the horizon. The kind of visual setting that makes one realize how small we are in the greater scope of things. I remember the setting more than what state I was in.

This one piece stood out to me, so I haggled a price and picked up a few other things, too. It was a slow, easy, comfortable place to be.

This pin is a subtle sign, a reminder to both myself and others that at heart I’m a road dude and that there’s nowhere I’d rather be than on the road, going somewhere, having new experiences. I like that it’s going from right to left, like a player on stage jumping in from stage right for dramatic impact.

One really cool thing about Roadrunners is that they have two toes facing forward and two toes facing back. Hard to tell from their tracks if they were coming or going, like the non-directional tires on military vehicles that helps protect a troop’s location.

I find that very fitting for my style of wandering. Doesn’t matter where I’ve been or where I’m going. I was here, though.

SW American Indians believed this non-directional track helped protect the Roadrunner, so often used the track symbol in their art.

Maybe I’ll use the track symbol somehow in my logo. 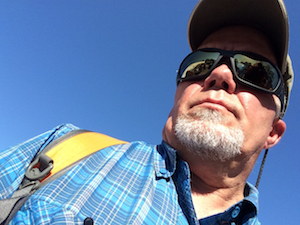 ROADDUDE.COM is about one man’s travels on the roads of North America, with stories and images about the people, places, and culture he encounters along the way.

Roaddude.com is a participant in the Amazon Services LLC Associates Program and others, affiliate advertising programs designed to provide a means for sites to earn advertising fees by advertising and linking to sites like Amazon.com and Adorama Photo.

THINGS ARE CHANGING FAST in regards to the #corona

DAMN MAN...SIMPLE TREATS CAN MAKE MY DAY . Nothing

Oh my god...I have not smiled and laughed out loud

LOTS OF NUMBERS FLOATING ABOUT THESE DAYS. . . in

REFLECTIONS - Sundays are for reflection. . #sunda

FAVORITE SKIES - I think everyone has a favorite s